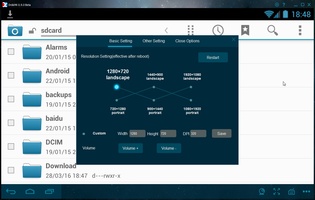 Advertisement
Thanks to Droid4X you can now use practically any application on Android. Droid4X is a full-featured Android emulator that you can use for anything, from video games like Clash of Clans or Subway Surfers, to apps like Kitchen Stories or Tubemate.

From Droid4X you're now able to record video files of anything happening on the emulator screen, you even have the option to toggle image quality settings anyway you want. One thing though, your video will have a Droid4X watermark.

Another very interesting option is customizing controls. When you run an app you'll be able to create personalized controls simply and intuitively. In less than a minute, you'll have to configure your keyboard or gamepad so that it'll adapt to literally ANY video game on Android.

Droid 4X is an excellent Android emulator, thanks to which you'll be able to enjoy all of the thousands of interesting apps that exist for the most widely used operating system in the world. You'll also be able to download Android apps directly off of the Uptodown website.
Reviewed by Andrés López Translated by Jessica
Advertisement

The application as such does not work when I run it to start and start the download I get "download failed " so if they can solve the problem I do not know if they are compatibility or what?...

Hell, I downloaded it, I thought it was okay, shit, I'm sorry that I say that the application is bad but join hands and improve this application!

can't be installed, stuck at 0%

AMD FidelityFX FSR2
EmulationStation
A good looking front end for your classic emulators
Xemu
An excellent Xbox emulator for Windows
Logaterix
Pioneer
DxWnd
Run games and programs in a smaller window
osu!
Keep the beat as the songs play
Game Fire
The easiest way to add speed to your games